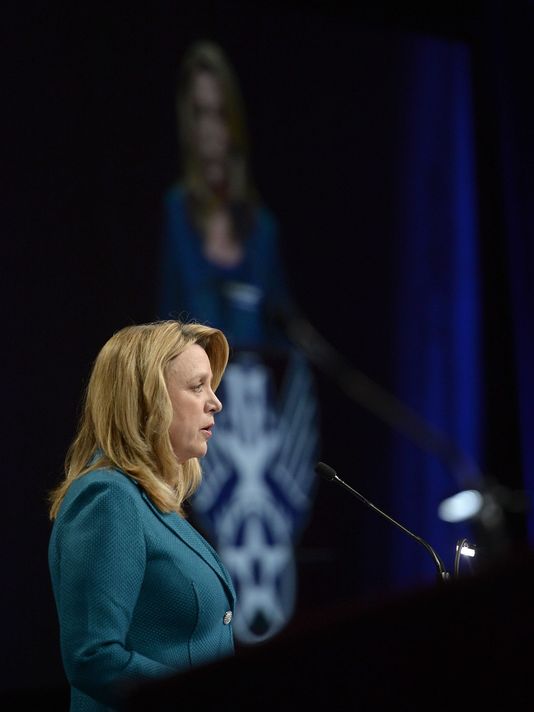 ORLANDO -- To alleviate the strain on an overburdened Air Force, Secretary Deborah Lee James is considering boosting its end strength by as many as 6,340 airmen next year.

The Air Force expects to grow from its current level of about 311,000 to 317,000 active duty airmen by the end of fiscal 2016, James said Friday at the Air Force Association’s Air Warfare Symposium in Orlando.

But although the service’s 2017 budget proposal earlier this month called for end strength to remain flat next year, “In reality, I think that mission demands will indicate that we need even more growth in FY17,” James said. James said her top priority is to beef up crucial career fields, such as intelligence, surveillance and reconnaissance, cyber, maintenance, and battlefield airmen.

To do that, James could rely on an already-existing but rarely-used authority that allows the Air Force secretary to go as much as 2 percent over end strength limits.

“I believe the demands on the force are such, given world conditions, I believe more than 317,000 is likely to be prudent,” James said in a roundtable briefing with reporters.

But it is far from certain James will use that authority to get the Air Force up to as much as roughly 323,340 active duty airmen. It will first depend on whether the Air Force can find enough qualified people to fill the necessary jobs, James said.

And while James already has the authority to exceed end strength limits, she would have to ask Congress for authority to reprogram funds to pay for those additional airmen.

The Air Force is trying to rebuild its force after the steep force management drawdowns of 2014, which cut about 19,300 airmen voluntarily and involuntarily. The Air Force started fiscal 2014 with an active-duty end strength of about 330,700 airmen, and dropped to about 311,000 by the end of fiscal 2015.

“We have been downsizing for a long time in our Air Force, and this simply must stop,” James said. “It is stopping. And now, we’re in an era of a modest upsize.”

James also said the Air Force is trying to make better use of its Guard and Reserve forces to help ease the burden on active duty airmen in areas like cyber and ISR.

And the Air Force hopes to increase its use of paid retention bonuses to hold on to valuable airmen in targeted fields, such as those in the remotely-piloted aircraft jobs, James said.