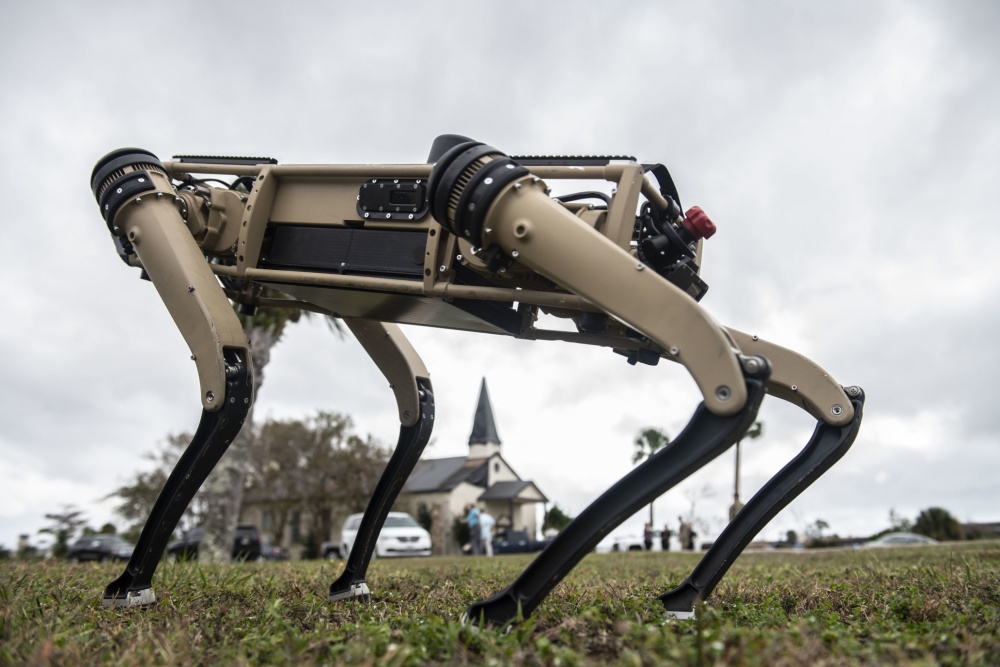 An unmanned ground vehicle is tested at Tyndall Air Force Base, Florida, Nov. 10, 2020. Tyndall is one of the first military bases to implement the semi-autonomous UGV’s into their defense regiment, they will aid in reconnaissance and enhanced security patrolling operations across the base. (U.S. Air Force photo by A1C Tiffany Price)

TYNDALL AIR FORCE BASE, Fla. – Over the last year, Tyndall Air Force Base and the 325th Security Forces Squadron have been working with Ghost Robotics to develop a system to enhance security and safety for the base population.

Tyndall will be one of the first Air Force bases to implement semi-autonomous robot dogs into their patrolling regiment. These computerized canines demonstrated their abilities Nov. 10 at an event attended by Maj. Gen. Tom Wilcox, Air Force Installation and Mission Support Center commander, and leadership from the 325th Fighter Wing and the Tyndall Program Management Office.

“We are very excited,” said Maj. Jordan Criss, 325th Security Forces Squadron commander. “We are the first unit within the Department of Defense to use this technology for enhanced security patrolling operations.”

While these robots walk on all fours and resemble a dog, they are not intended to replace the military working dogs. Instead they will aid in patrolling operations and, in doing so, allow Tyndall’s defenders to focus their efforts on security actions that require a physical presence.

“These robot dogs will be used as a force multiplier for enhanced situational awareness by patrolling areas that aren’t desirable for human beings and vehicles.” Criss said.

Criss explained that the robot dogs will be given a patrol path which will be set and monitored by the Security Forces Electronic Security Sensor System noncommissioned officer in charge.

“We will be able to drive them via a virtual reality headset within our Base Defense Operations Center,” said Criss. “We will be able to see exactly what the robot dog is detecting through its mobile camera and sensor platform if desired, we will also be able to issue verbal commands to a person or people through a radio attached to the dogs.”

The semi-autonomous canines allow defenders that would otherwise be patrolling these areas to focus on training, security and overall situational awareness across the base.

“These dogs will be an extra set of eyes and ears while computing large amounts of data at strategic locations throughout Tyndall Air Force Base,” Criss said. “They will be a huge enhancement for our defenders and allow flexibility in the posting and response of our personnel.”

This technology has the potential to replace and exceed the capabilities of certain static defense equipment especially in a contingency, disaster, or deployed environment. This makes Tyndall, post Hurricane Michael, the perfect home for the Air Force’s newest computerized canines.