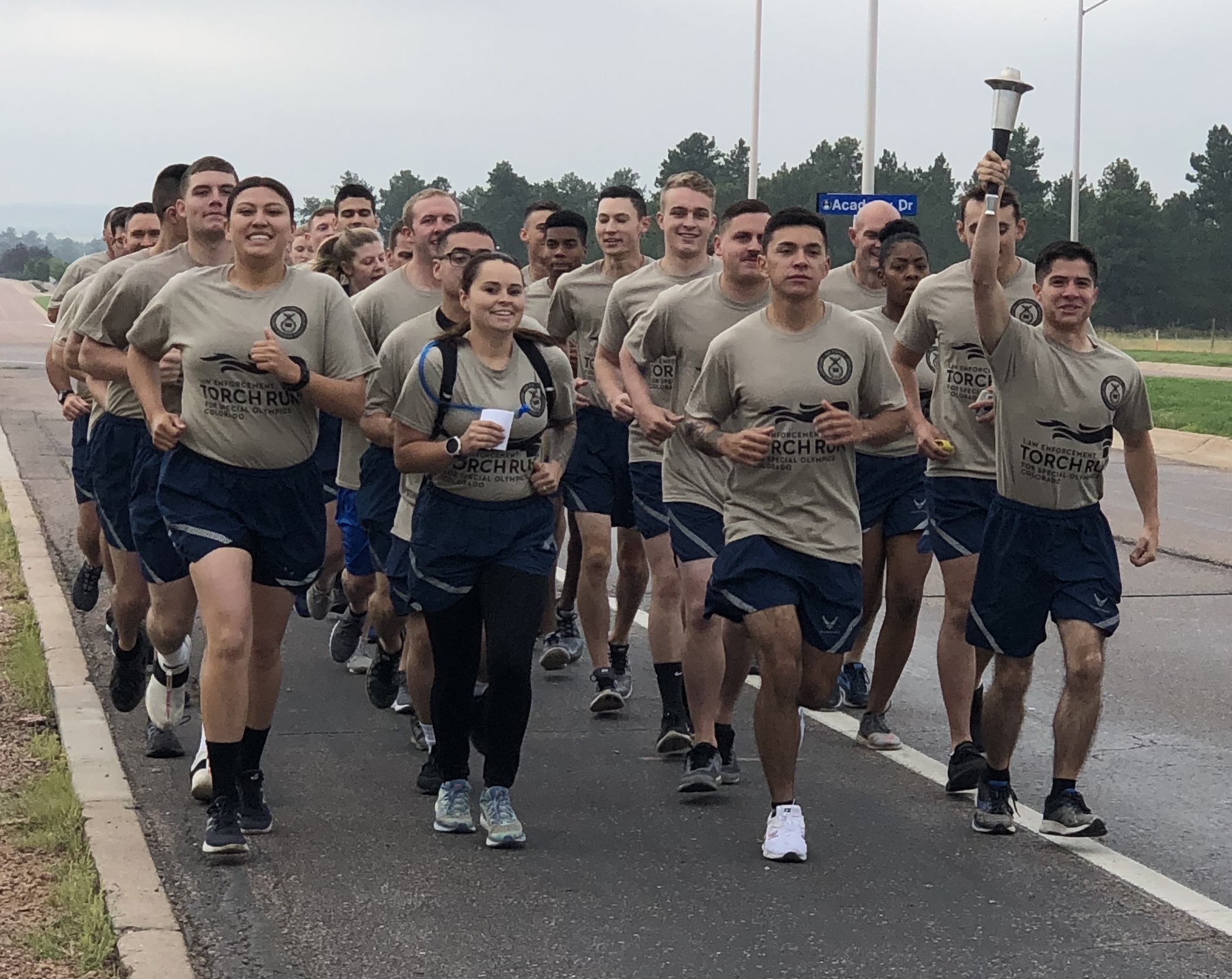 No, this wasn’t the first time Security Police or Security Forces ever participated in a Special Olympics Law Enforcement Torch Run (LETR). And, it was far from a first-time LETR event for Special Olympics Colorado involving members of the U.S. Air Force. But, here’s what made this event unprecedented; August 24, 2019 marked the first-ever Law Enforcement Torch Run sponsored solely – as well as organized, by the Air Force Security Forces Association.

Late last year, AFSFA became an Affiliate with the Law Enforcement Torch Run/Special Olympics International (see article in Jan-Mar 2019 issue). And, it was a very proud occasion when only a short time later the Front Range Chapter was presented with the opportunity to help organize an event with Special Olympics Colorado.

The pride of each one of the torch bearers was visibly evident on their faces – especially after completing their long early morning run. AFSFA Executive Director John Probst was on hand driving a support van and later related: “Air Force Security Forces Association, the professional association for all Air Force Security Forces – Active Duty, Guard and Reserve, is proud to be a partner with the Law Enforcement Torch Run for Special Olympics.” And, the performance by our torch running Security Forces set high expectations for future LETR events.

LETR was started by Wichita, Kansas Police Chief Richard LaMunyon in 1981. Today, nearly 110,000 law enforcement members carry the “Flame of Hope” annually. The flame symbolizes courage and celebration of diversity uniting communities around the world. Today the LETR has become the Special Olympics’ largest public awareness and fundraising group for athletes and people with intellectual disabilities.

Several Front Range Security Forces Defenders expressed their own perspectives on being a part of this movement that is making huge improvements in the lives of some amazing people. Brittinie Alvarez from 50th SFS at Schriever AFB, expressed her feelings this way: “From the start, you could see all of the SF runners ready – the first bit was an easy run. Then the gradual incline and it was a bit tougher. We weren’t running for ourselves though, we had a purpose. And when we were joined by the athletes, it was very sweet.” And, it was apparent that the Special Olympians and their families and friends were positively affected by the sharp formation of Security Forces members delivering the “Flame of Hope.”

Susan Foege, Special Olympics Colorado, commented about the torch runners and their impact on the opening ceremonies, “The excitement in the crowd grew as we announced and saw the arrival of the torch and your group. Watching and hearing the group call military cadence as they came towards the cauldron drew a huge round of applause. Then, as the torch was handed off to the athletes, your group filled in to provide them with support and cheer them on.” She went on to express how much our Security Forces torch runners added to the excitement, energy and support to the Summer Classic. From her perspective as Director of Competition, “The torch run and lighting of the cauldron is one of the most spectacular parts of our Opening Ceremonies.” 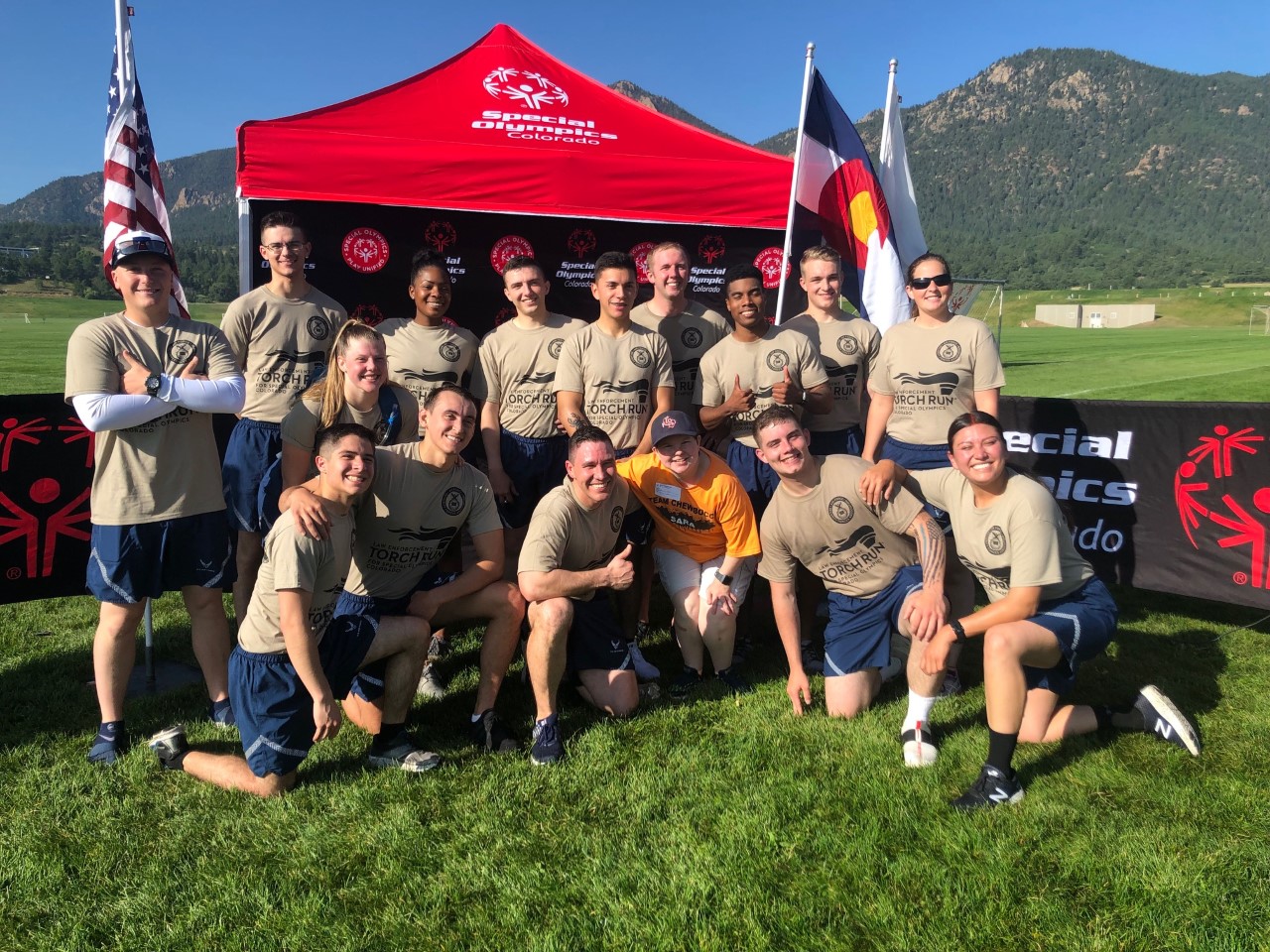 Another aspect that made this such a special LETR was the level of involvement, cooperation and overall support the event received. Starting with the AFSFA National Headquarters, site host USAF Academy athletic staff, as well as the individual runners and the units they represented – all combined for successful execution of the challenging feat. The AFSFA Front Range Chapter, along with Security Forces members from Peterson AFB, USAF Academy, and Schriever AFB – as well as all the way from Buckley AFB came together to make the first AFSFA sponsored Law Enforcement Torch Run a big success.

But, be assured this is only the beginning of a wonderfully promising partnership between the Law Enforcement Torch Run/Special Olympics International and AFSFA. Special Olympics Colorado has already asked the Front Range Chapter to work with them at their 2020 Summer Classic.

And, when you get the chance to participate in a LETR, or other Special Olympics activities, do not pass up the opportunity. The experience may just make a difference in your life as well.