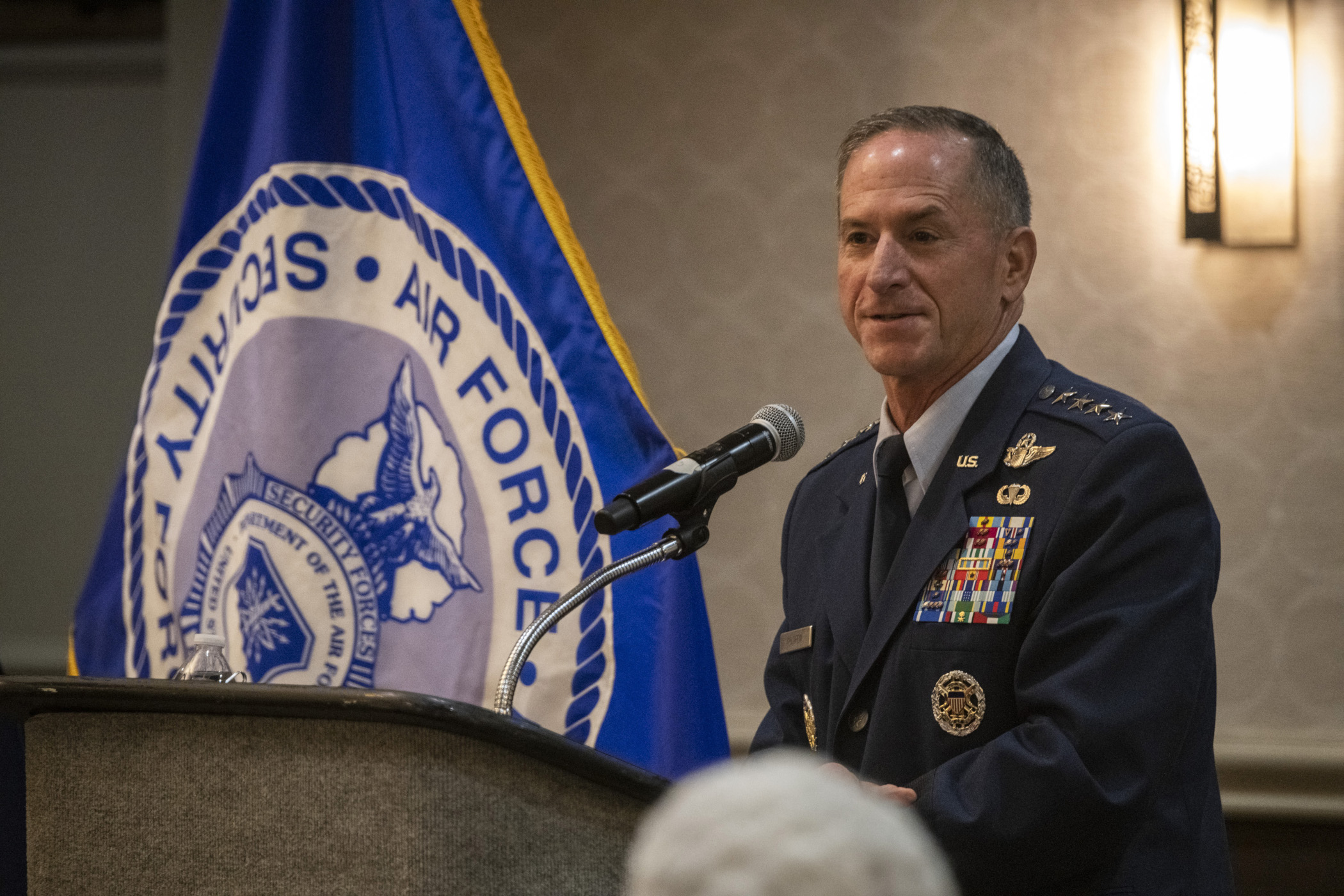 Joint Base San Antonio, Texas - Air Force Chief of Staff Gen. David L. Goldfein discussed the Air Force’s transition from Year of the Defender to Year of Integrated Base Defense, focusing on how elite Defenders fit into a layered defensive network, in a speech at the 33rd National Meeting of the Air Force Security Forces Association in San Antonio Sept. 28.

Goldfein began by speaking about the beret worn by Air Force Defenders. “That beret represents those who are the best in the world at integrated base defense,” he said. “Elite Defenders…wearers of that beret guard our nation’s treasures and it is our sacred duty to protect them.”

Goldfein announced The Year of the Defender a year ago, “which led to the Reconstitute Defender Initiative,” he said.

But it was a serious security incident at Royal Air Field Mildenhall, England, where an individual was able to drive onto the flight line and ram into an aircraft before he was apprehended, that got the program moving.

“A challenge was turned into an opportunity,” said Goldfein. “We took a good hard look at ourselves in the mirror and determined that we had gone for way too many years without investing in our elite Defenders as a foundation of who we are as a globally engaged service.”

“So we re-focused on proficiency and small unit tactics,” he added. “We increased our investment in our Defenders with $180 million in new equipment just last year.”

“We’ve made great progress, but we have miles to go,” said Goldfein. “And I will commit to you that we are not going to take our foot off the gas.”

Goldfein referenced the annual Wing Commander Conference he recently hosted, where he engaged with 280 warriors for two days talking about the business of warfighting and leadership.

There, Goldfein shared his vision where an Alpha Warrior Operational (physical) fitness program will be directly associated with the tough business of base defense, along with daily weapons marksmanship training. “I’m not talking about once or twice a year,” he said. “I’m talking about every day, because confidence in our primary weapons comes from repetition.”

Goldfein went on to say that building state of the art ranges at each base would be unattainable, but that there may be answers in being creative and expeditionary at home.

He referenced a shoot house built by the 23rd Special Tactics Squadron at Hulburt Field, Fla., which was built from steel and plywood for about $18,000, and is used daily with live rounds.

“We have got to get creative to get our Defenders more trigger time and work on proficiency and competence with their weapons,” said Goldfein. “And I don’t want you to wait for me to move out on this; as I told the wing commanders; I trust you, go long, I’ve got your back.”

Goldfein went on to emphasize the importance of his message. “We’ve got to be laser focused on combat proficiency because the threat is outside the wire right now as we sit here,” he said. “They are sizing us up, looking for weaknesses in our lines; what we want them to determine is that we are just too hard a target to penetrate.

“I want them to see the beret and know that they are up against the best and are doomed to fail,” he added.

“So we’re going to build on our progress from The Year of the Defender to focus on how elite Defenders fit into a layered defensive network,” he said. Our Defenders should be looking at the entire integrated base defense network that included sensors well beyond that fence line to get a sense of the operational environment.”

“Every Defender should be connected; A walking server, a node in a network that senses and shares data and communications at the speed of relevance against the threat.”

Goldfein went on to define what some current and future threats look like. “So now it’s time to prepare for the next attack that will likely include cyber operations, hybrid warfare, Special Forces and enemy drones.”

“It’s your creativity, your ingenuity, your innovations and your courage that are going to help us prepare for that fight,” he added.

“This is one thing I can look at each and every one of you in the eye tonight with absolute clarity, we have from this moment until that fight starts to get our forces ready,” he said. “And we should treat every week as the last week of peace, and an absolute blessing.”

Goldfein closed by addressing Defenders in the audience. “So to our Defender team here tonight past and present, and your justifiably proud families,” he said. “What an honor it is for me to be part of this special evening, I could not be prouder to serve with each of you as your chief when our country needs us most.”