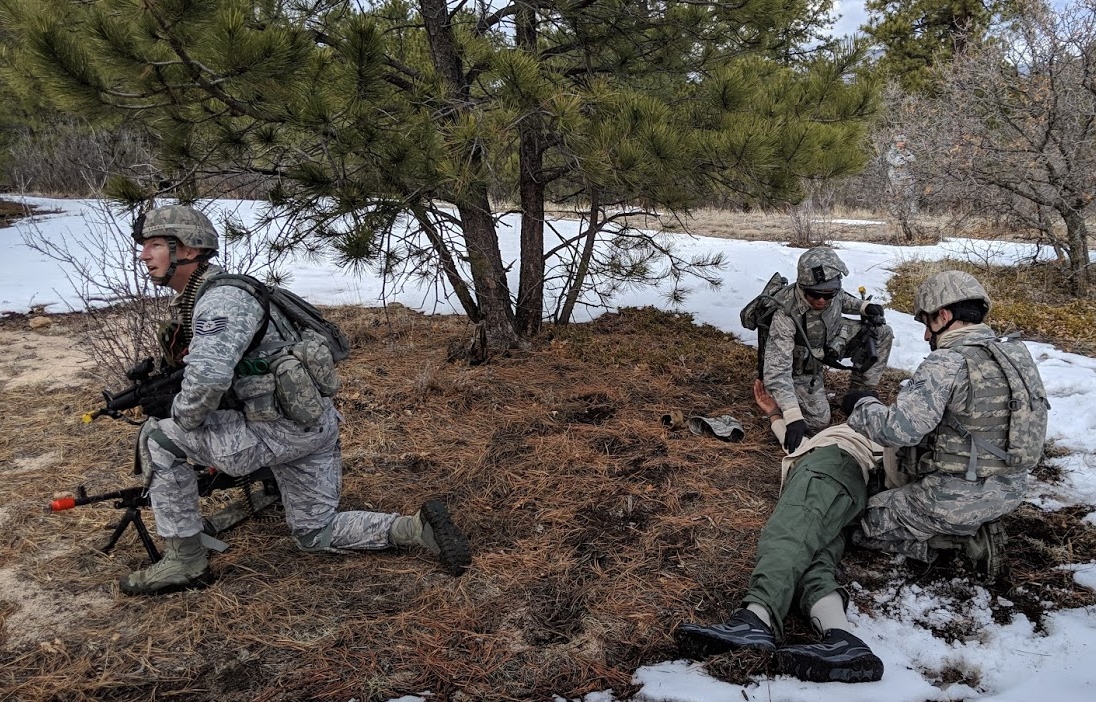 Chief Safley and I visited our security forces squadron at the U.S. Air Force Academy two weeks ago while they were conducting their annual tour training. The facilities were great, the backdrop was amazing and the training they accomplished was super. In two weeks, our SFS was able to complete training that would have taken 18 months to normally complete. They endured long days, austere field conditions, cold temperatures, snow, sleep deprivation, long briefs and debriefs, lots of critiques, and physical stress. Yet I still saw smiles on their faces, determination in their actions and motivation to get better. These are a group of men and women that will be defending our bases, kicking down doors, searching villages, rescuing airmen and will definitely be in harm’s way, we owe them a lot of gratitude.

On the day we visited, three fire teams departed their forward operating base with a plan to travel to an “objective” where they would encounter enemy forces (played by other SFS members). After they had begun this particular operation, their cadre injected a new mission--to rescue two pilots whose helicopter had crashed. I was asked to play one of the downed pilots along with SSgt Villanueva (“V-10”). We were dropped off at a site with the real wreckage of a UH-1 “Huey” helicopter, pretty realistic training in my opinion. As V-10 and I waited for the fire teams to find us, we hunkered down in the wreckage knowing that the enemy forces were also nearby and pretending to be injured. As the friendly fire teams approached, chaos ensued. We were surrounded by small and heavy machine gun fire, small arms fire, and smoke… all accompanied by lots of yelling and screaming. As all of this was going on, over my right shoulder someone starting yelling, “Hey dude, are you okay?” At first I didn’t realize he was yelling at me until the third or fourth time hearing it. When I finally realized it was me he was yelling at, I chuckled to myself at the thought of being called “dude” and answered back, “No, we’re hurt and need assistance.” We were eventually rescued and taken back into friendly territory, which marked the successful conclusion of that day’s exercise.

As I was walking back to the camp, I started thinking about what a great experience it was to be with our SFS and the “Hey dude, are you okay?” security forces member. Granted this was only training, but in a real world situation, he would have done the same thing--risk his life for mine. Not because of who I am or the rank I hold, but because I’m a fellow airmen who was in harm’s way. Think about that for a moment. Someone who doesn’t even know me is willing to risk their life for mine. Two of our core values-- Service before self and Excellence in all we do--could not have been more prevalent in that situation. The way that security forces watch out for one another is imperative to their mission; they must watch each other’s back, 24/7, in all conditions or the results could be catastrophic. This is the mindset that everyone in the 301st Fighter Wing should have--to look out for one another and have each other’s back. When a friend, a family member or a co-worker needs your help, you have to drop everything and render assistance. We are always fighting a battle; whether it’s in public or in private, at home, at work or on the battlefield. Watch each other’s back, take care of your co-worker, keep an eye out for one another and don’t forget to ask….”Hey dude, are you okay?”